Do you build your UI's in MelonJS or DOM? 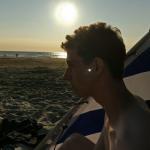