Move a sprite around a circular path, only when pointer is on path 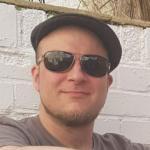