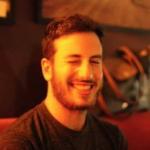 Have one "body" attract all other "bodies". Basically have the earth with gravity.