Using AngularVelocity, "snap" to angles that are multipliers of 90 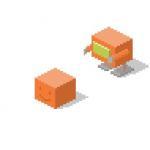