What is the standardmaterial.lightmapTexture for? 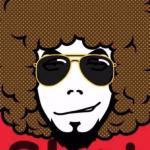